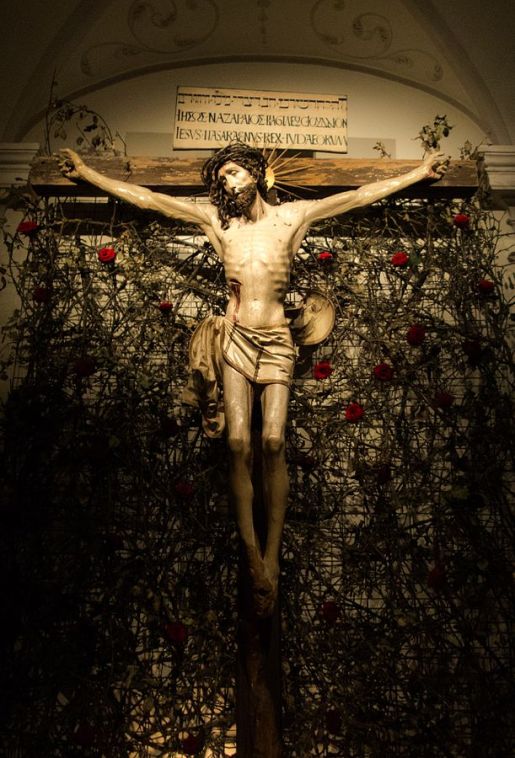 Jesus of Nazareth on the Cross by Walter7575 CC BY-SA 4.0 Wikimedia Commons

Lord Jesus Christ, Son of the living God
for our redemption
you were born and circumcised,
rejected by the Jews,
betrayed with a kiss by Judas,
seized, bound, and led in chains
to Annas, Caiaphas, Herod, and Pilate,
and you stood before them to be mocked,
smitten with palm and fist,
with the scourge and rod.
Your face was defiled with spitting.
You were crowned with thorns
and accused by false witnesses.
You were condemned,
and as an innocent Lamb led to slaughter,
bearing your own cross,
pierced with nails.
You were given gall and vinegar to drink
and you were left on the cross
to die the most shameful of deaths,
and then wounded with a spear.
By these your most sacred pains
you deliver us from all sins and penalties.
By your holy cross
bring us sinners
where you brought the repentant thief;
for you live and with the Father and the Holy Spirit,
one God, now and forever.
Sarum Missal, Innocent III (1161-1216)
The New Ancient Collects, revised by Paul Stratman
________________________
Luke 23:44-46
It was now about noon, and darkness came over the whole land until three in the afternoon, for the sun stopped shining. And the curtain of the temple was torn in two. Jesus called out with a loud voice, “Father, into your hands I commit my spirit.” When he had said this, he breathed his last.