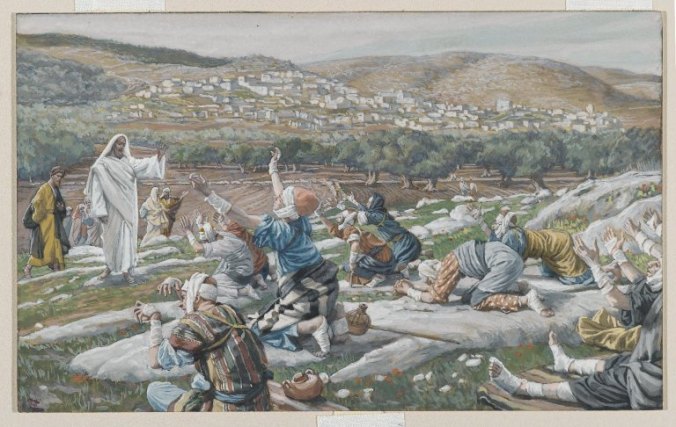 The Healing of Ten Lepers by James Tissot

Father,
before I was ill I never knew you.
I never knew that you loved me.
My life was far away from you, Lord.
Father, forgive my sins.
Thank you.
Now I know the Lord has saved my soul.
My Lord,
I want to offer you something but I don’t have anything.
I ask; receive my life as your instrument.
I want to rejoice your heart.
Father,
Hear my prayer.
In the name of the Lord Jesus I pray.
Amen.
cured sufferer from Hansen’s disease (leprosy), Indonesia
The Westminster Collection of Christian Prayers
__________________
Luke 17:11-16
Now on his way to Jerusalem, Jesus traveled along the border between Samaria and Galilee. As he was going into a village, ten men who had leprosy met him. They stood at a distance and called out in a loud voice, “Jesus, Master, have pity on us!”  When he saw them, he said, “Go, show yourselves to the priests.” And as they went, they were cleansed.  One of them, when he saw he was healed, came back, praising God in a loud voice. He threw himself at Jesus’ feet and thanked him—and he was a Samaritan.