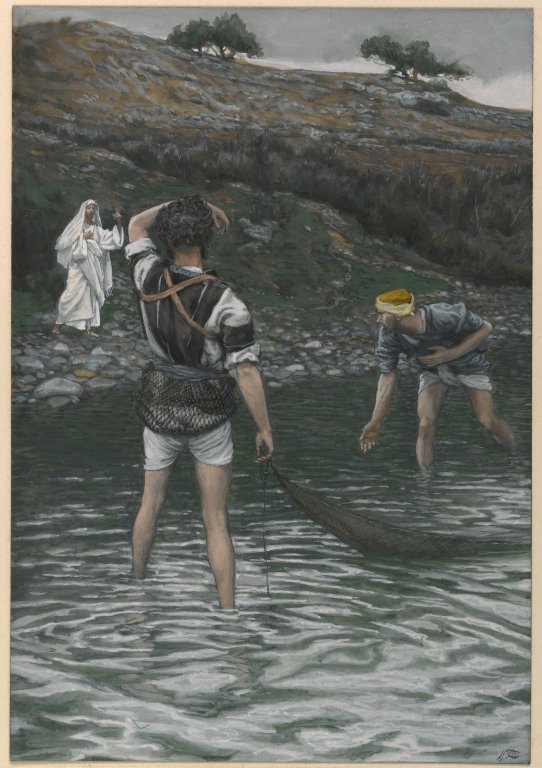 Our gracious, eternal God, we thank you that Jesus’ call to his disciples came in such an uneventful way.  Contrary to the wisdom of the world he did not start with the privileged and the wealthy and the powerful.  He did not begin with those who had little need and little desire for change. He began with some very simple folk. He began with some fishermen.
We pray that his call, “Come, follow me,” might again reverberate through our souls today.
May we hear again the challenge to be your disciples.
May we hear again the message of this one who brings good news.
May we hear again the invitation to come to you,
“all you who are weary and heavy laden.”
May we hear again eternal words of hope which tell us that however dark the world becomes the darkness cannot ever overcome the radiant light of this holy one, Jesus.
May we hear again those simple words:  “Come, follow me,” and may we come, just as we are, and know again the depth of your grace and love for us.
Give us the power to bring change and transformation to the peoples of the world as did those early fishermen. Give us the power to provide the same kind of hope for the world-weary as they brought to theirs. Give us the vision of a world transformed.
Richard J. Einerson, minister in the United Churches of Christ
Prayers of the People, slightly modified
____________________
Mark 1:16-20
As Jesus walked beside the Sea of Galilee, he saw Simon and his brother Andrew casting a net into the lake, for they were fishermen. “Come, follow me,” Jesus said, “and I will send you out to fish for people.” At once they left their nets and followed him.
When he had gone a little farther, he saw James son of Zebedee and his brother John in a boat, preparing their nets. Without delay he called them, and they left their father Zebedee in the boat with the hired men and followed him.

One thought on “hearing again the call to discipleship”